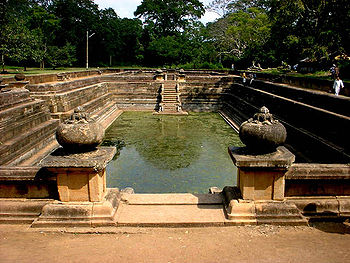 Travelers who have a sense of history or at least appreciate the cultures of the past will definitely want to pay a visit to Anuradhapura. This city used to be the capital of Sri Lanka – way back in the ancient times. Today, it is best known for its ruins, which are quite well-preserved.

The city is located about 200 kilometers (125 miles) from Colombo, which is the current capital of Sri Lanka.  From Colombo, you can just head up north and you’ll eventually hit Anuradhapura.  Aside from its popularity with visitors, Anuradhapura holds the distinction of being a UNESCO World Heritage Site.  That in itself should tell you that it is worth visiting.

Let’s take a quick look at the history behind this place.  Historical records and archeological data are conflicting as to the founding of the city.  The former states that it was founded in the 5th century BC.  However, archeological findings indicate that the city has been in existence as early as the 10th century BC.  In any case, they both point to one thing: this city is quite ancient and is definitely steeped in history.
In the 4th century, it became the capital of Sri Lanka.  Anuradhapura held this status until the 11th century AD.  More than being the capital of the country, Anuradhapura was considered to be one of the foremost cities in the South Asian region during its prime.  This city is also considered to be sacred by the Buddhist religion, hence the monasteries that can be found in the area.
Today, the ancient capital is in ruins, although the ruins are in very good condition, making Anuradhapura perfect for history lovers.  There is a lot to see in Anuradhapura, first and foremost of which is the Bodhi tree. It is, in fact, one of the most sacred items in the whole country.

Story has it that this tree – which could very well be the oldest in the world – comes from the actual Bodhi tree under which Buddha gained enlightenment.  Today, there is a wall around the tree, which was built by King Kirthi Sri Rajasingha.

Visitors should not miss Ruwanwelisaya, which is a stupa.  A stupa is translated into English as heap, and it is actually a structure resembling a mound.  Usually, a saint or some other religious person is buried underneath and the people use the stupa as a place of worship.  This stupa is an impressive compound with stone elephants all around.
Another must visit is Kuttam Pokuna, which is generally considered to be the most impressive example of a bathing tank. There are actually two tanks or ponds which are separated by a garden. The walls of the ponds are covered with granite slabs and the entire area is covered by walls as well. The ponds differ in size and depth, with the smaller one measuring in at 91 feet long, 51 feet wide, and 14 feet deep.
These are only a few of the attractions that you can see in Anuradhapura.

There is no doubt about it – these ruins can bring an extra dimension to your visit to Sri Lanka.