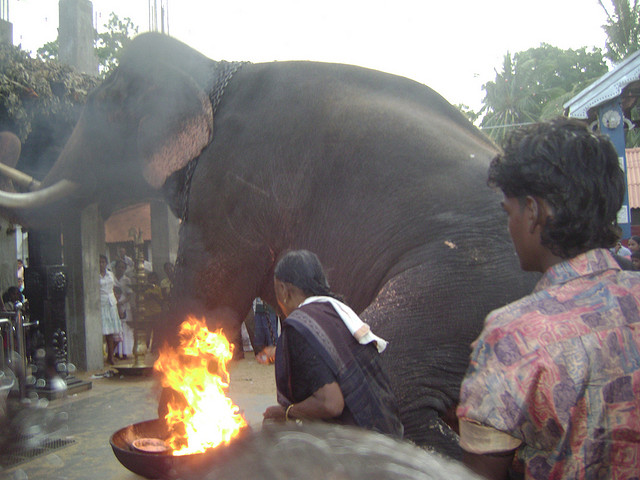 Kataragama – The Place and the God

The Kataragama Festival is held in a town in Sri Lanka of the same name. Kataragama is a pilgrimage town held sacred by the Buddhist, Hindu as well as the indigenous Vedda people of the country. There is great reverence for the god Kataragama among the people of Sri Lanka in spite of differences in class and creed.

The god is considered the guardian deity of Buddhism as well as the presiding deity in the Kataragama Temple. He is often portrayed as a red god carrying a trident. He is known both for his military and amorous exploits.

The festival happens annually during the months of July to August. The whole town is literally a feast for the senses as it becomes alive with activity, color, and prayers. Barefoot devotees carry plates filled with fruits and flowers specifically red garlands to be offered to the god. All wait silently as the temple elephant makes its way to the shrines.

It holds a single lotus flower by its trunk which is to be placed before the statue of Buddha while kneeling at the signal of the mahout or the person tending to the elephant. It is to be repeated in front of three shrines. As the elephants parade and the drummers beat on their drums, the people perform their extraordinary acts of devotion.

It would take real devotion to be able to perform the acts of mortification or penance, as they see what they do. These acts relate to inflicting physical pain on themselves. These would include walking on beds of hot cinders, rolling half-naked over hot sands, and swinging from hooks that pierce their skin. They also do fasting, meditating, and praying. All these they do as an act of cleansing themselves.

The water-cutting ceremony is an important part of the festival.  In this ritual, the devotees wait for the auspicious time to bathe or drink the water which is supposed to be sacred and able to fight off evil. The scenes that are simultaneously happening during the festival make for one spectacular sight for any tourist wishing to discover another side of Sri Lanka.